The Eye of Oden podcast – Episode 2: The biggest challenges for manufacturers in 2019

In the second episode of The Eye of Oden podcast, we’ve caught up with Willem Sundblad, co-founder and CEO of Oden Technologies to discuss the biggest obstacles for manufacturers today.

VO: Manufacturing is going through the renaissance, but not without its challenges. Here’s what Willem Sundblad, co-founder and CEO of Oden Technologies sees as the biggest obstacles for manufacturers today.

Willem: It’s interesting because right now it is such a good time in manufacturing. Filling orders and hiring people is actually the biggest challenges for most manufacturers. Manufacturing is extremely cyclical so know when there’s good times they try to make as much as they can and make as many products as they can. And you know they’re trying to make sure that they’re being as efficient as they can. But they’re really struggling to hire the right people, the right talent also. So obviously it’s the third thing. I would say the biggest challenge is also competition. You can see that all across the globe right now that you know they’re competing on a global scale. You’ve got now competition in China. Competition in the US and Europe. It’s really only the small regional niche players that aren’t feeling the pressure of competition which is kind of interesting because we’re seeing the adoption with the bigger companies because that’s where they have that competitive pressure. That’s where they have now really the need to improve, they need to innovate. The small regional players, they’re servicing their target audience. But in all of those areas in meeting demand, in shipping product out the door and shipping good product out the door, in getting a competitive advantage, in attracting people. I think that what we do are really compelling solutions for all of those three problems really.

VO: But can manufacturers overcome the challenges and how?

Willem: Well so on the first two: on competition and in shipping products out the door that’s extremely straightforward. In the end because if you’re losing five to 30 percent revenue to the cost of poor quality, if you’re losing 10 to 20 percent of your time to unplanned downtime. Understanding what that downtime is, being able to prevent it with alerts and predictions is a very straightforward way of delivering better to the customers. And also the true value of the analytics is in the bottom line impact that it has which obviously can really change the game in a competitive standpoint too. It’s either that they can lower the price but maintain the margin or they can really start in getting more bottom line frankly to invest more in the business and its people when it comes to the people in the factory. And it’s interesting because if you look historically, a lot of the jobs in manufacturing that have been lost haven’t actually been to outsourcing. I think that something like 76 percent of the jobs lost in manufacturing have been to technology and automation rather than offshoring. But it’s not clear, this chicken or egg thing because actually if you look at the biggest challenge, it’s a skills gap in the workforce development that are facing manufacturers. The problem is that not enough people are going into manufacturing to start with. So you have to automate and you have to improve the technology because you have to make do with less people because fewer people want to work in factories. And I think that’s part is information asymmetry. Again I think that there’s not enough people that understand or know how exciting and rewarding and fun their career in manufacturing can be but partly it’s just people want to work you know they want to live in the cities they want to work with other types of tools and technologies and markets. So being able to make sure that your existing teams are as productive as they can be. So that one process engineer can do the job of three engineers is really critical for the success of the manufacturing industry. And I think we’re where we’re going towards that but I don’t think it’s the technology that’s taking people away from those jobs it’s people who are leaving it. And technology helps the people that are there.

VO: Robotics is the talk of the town. But what real impact can we expect, and will the robots put us out of the job?

Willem: So I feel like some people too black and white view of robotics saying that oh everything will be robotics, same way that people say oh well we’ll just 3D print everything in the future. I don’t think it’s as binary as that. I think that robotics and collaborative robots will come in and do tremendous things to alleviate people of menial tasks frankly and help really ensure higher compliance higher traceability and higher quality in the manufacturing process. But I still think that there is a huge need to have the human in the loop in the manufacturing process. And that’s a term for the machine learning kind of industry: having a human in the loop machine learning. I think it’s the same thing with human loop in manufacturing process because there’s things that people are great at and there’s things that computers and machines are great at. And you should leverage both to the highest kind of combined strength rather than look at it as a binary who’s going to win.

VO: Let’s talk about this machine and artificial intelligence that everyone is so excited about.

Willem: If you’re thinking about how can a system, how can a software, how can a piece of technology create value. There’s two things really. One is to help a person do something faster than they could otherwise. So as an example, their software might help a person solve a problem in five minutes that would otherwise take them a day. That’s obviously valuable. And that’s good. Where it gets really interesting is whether technology helps the person solve a problem that they wouldn’t otherwise have been able to at all. And that’s the same type of things that you can do with machine learning and artificial intelligence. Because you can start actually analyzing more data than a person could consume or more data than a person could compute in 10 lifespan pretty quickly to come up with what is the perfect way of making this product. So as an example the environmental analytics, that type of analysis just wouldn’t be possible by a human so that really takes a huge transformative leap in how people interact with material, machines to make the most efficient products. And  we’re really not even scratching on the surface on the type of value that we can create there because even that case uses very simple machine learning techniques frankly. But there’s other ways that you can apply artificial intelligence where you’re just doing the type of analysis that just wouldn’t be possible for a person or team of people to do like other startups that tackle this specific space.

VO: There’s been a big explosion in the number of startups that are focusing on improving how factories are run. Why is it happening now?

Willem: What we were trying to do, you had the enabling technologies of wireless networks becoming ubiquitous. You had cloud computing which has tremendous value to what we’re doing, but in 2014 it still had a very bad perception in the manufacturing industry. It’s just now that people are really coming round to understanding how it’s actually more secure and it gives them tremendous economies of scale. And then you’ve got the kind of decrease in cost of electronics so doing what we do now would be extremely different 5, 10, 15 years ago. I actually meet people all the time who say oh I had this idea I tried to start this in the 90s, when I tried to start this in 2002 and they couldn’t get the technology to work because at that point couldn’t move the needle from what Rockwell and Siemens, and Schneider were doing. But now you can with a completely different technology stack. I also think that there’s a tremendous amount of information asymmetry, you can look at the Venn diagram of people who are entrepreneurs who want to start tech businesses and the people who really know intimately about the challenges that are facing manufacturing that Venn diagram has a very small intersection. So there are some very few people that actually know about this opportunity and know about how much value you can create in manufacturing and how rewarding it is frankly and how available that is.

When we started in late 2014 early 2015 I saw the biggest risk to us was that we were too early. It is very obvious to me that this is how the future of manufacturing will look like. And we’ve got a tremendous opportunity in being the company that defines that. And so we have to do everything that we can to both attract the customers that are the early adopters but also evangelize about what’s possible. You know we saw In the last couple of years we just saw a lot of confusion in the industry. We saw a lot of wait and see, we saw the majority of the market kind of not knowing or understanding what industry 4.0 will concretely mean for them. So we saw it as a huge part of our job is to really evangelize and talk about concrete solutions. Talk about this is how it’s going to impact their day to day. This is what’s possible. This is how we get started. And so that’s even though we’re a product company, we’re not a consulting company. There’s a lot of learnings that we get from just seeing how the industry is moving, seeing what we’re doing, seeing what works, seeing what our competitors are doing and when we can know if we’re open about that that is just going to help the entire industry. 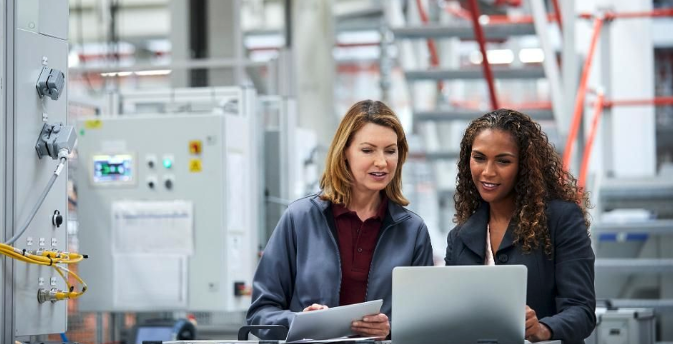 Forbes: How Manufacturers Can Get IT And OT To Work Together

The clearest, fastest way manufacturers can capitalize on data analytics